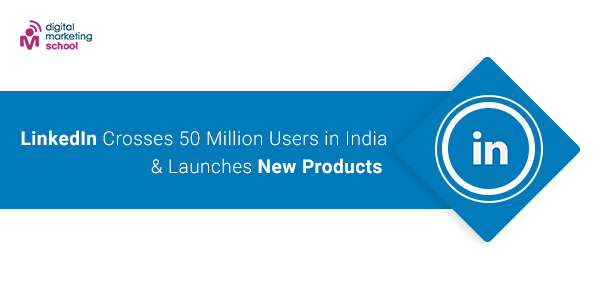 India is one of the growing countries using LinkedIn. And since it has taken a turn for the better in the professional lives, with more than 50 million people being now part of it. India is now the second market that has expanded its users. With this tremendous success rate, LinkedIn India has also launched two brand new products.

The total number of users back in April were only 42 million. And since then, LinkedIn started increasing their local offers, and hence, the users increased immensely.  LinkedIn’s recent research shows that out of all the countries, India grew its users at a much faster rate.

According to the new country manager Akshay Kothari,  “a lot of the (India growth) is fueled by increasingly making the product more useful for tier II and III cities, focusing beyond knowledge professionals. In the last year, growth has re-accelerated for us by investing locally in markets like these.” In September 2016, LinkedIn India launched LinkedIn Lite for users who have low data connectivity. And in 2017, this came to android users. This, however, was launched globally and was downloaded by more than 1 million people.

And currently, LinkedIn is working on two other Indian-based innovation. One of them is the resume builder that was launched some months ago. And since then, more than half the premium users are already using this feature. You can now create your resume with a click of a button with only LinkedIn’s basic profile. And this feature will soon be available to the rest of the world.

LinkedIn India is mainly focusing on extending its platform to the blue collar workforce. It has partnered with IL&FS Development Corp. in order to help students create skills with two-hour course materials!

So, now that we know that LinkedIn is mainly focusing on Indian users in order to grow its users whether premium or non-premium, we are now sure that it will definitely help the workforce in creating better opportunities for themselves with a perfect profile. So, if you haven’t created your profile on LinkedIn, now is the time! You can create a better impact on the recruiter with a professional resume. And yes, as a student, you can definitely learn and master some skills that you’ll be needing in the future.